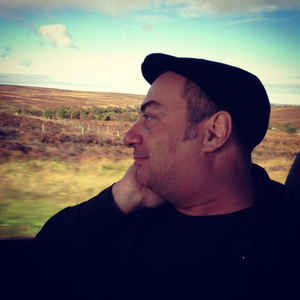 Count Dubulah (aka Nick Page) is a guitar and bass player, writer, remixer and producer, from Finsbury Park, London.

He has also worked under the names Tax D, Kid Ouzo, Plato Page and Psycho Karaoke.

A Greek mother (writer and photographer) and English father (painter and writer), both music lovers got him started on the path he is still on.

After leaving music college, Dubulah started working with (amongst others)

(Massive Attack, and everyone).

He was a founder member of influential top 40 chart band Transglobal Underground, co-producing and co-writing the first 5 albums from1990 to 1996 for Nation/BMG, Sony and MCA. He also worked with Loop Guru and Fundamental, and has worked with a range of artists producing, writing, playing and arranging,

The first Dub Colossus album “Addis through the Looking Glass ” went to No1 in the European World Music Charts, and the 3rd album “Dub Me Tender” won the Songlines 2013 best cross cultural collaboration award, being awarded dec 13th 2013 at the Barbican.

Nick has toured extensively around the world, playing many Glastonbury (inc 2013) and Womad shows, Roskilde etc and in january 2015 played Jaipur Literary Festival in India for the 2nd time.