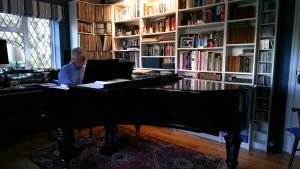 John Donegan, Irish born and living in London, is a renowned modern jazz pianist, writes and performs standards and originals in the BeBop style with his Trio.Quartet and Quintet.

He performs regularly at the Café in the Crypt at St Martin-in-the-Fields and other London jazz venues, has been featured on BBC, JazzFM and RTE. He has also played in many venues and Festivals in the UK, Ireland, France and Portugal and has played at Birdland in New York.

He has also been in the recording studios and his latest album, Jen’s Progress, which was named after the second of his three daughters, was launched earlier this year and his forthcoming album, Amarie, due to be released by the end of 2017, will be dedicated to his wife, Marie.